The Pennsylvania DUI law prohibits an individual from driving, operating, or being an actual physical control of the vehicle while being under the influence of alcohol and/or drugs.

Blood alcohol concentration (BAC): this is the amount of alcohol by weight in the bloodstream. The legal limit is .08% and anything over that amount is automatically considered being under the influence, no matter how the driver feels or how well he is able to drive.

Driving, operating or actual physical control: Pennsylvania’s DUI law prohibits a motorist who is under the influence from “driving, operating or being in actual physical control of the movement of a vehicle.” A vehicle does not have to be observed in motion by the police officer but means that the state must prove that someone operate the vehicle while under the influence or was in control of the movement of a vehicle. Examples of actual physical control include falling asleep behind the wheel at a traffic light, pulling over to the side of the road, getting into a crash and ending up off the roadway.

Alcohol Absorption Rate: Absorption Rate is the rate that alcohol absorbed into the bloodstream and varies from individual to individual. The rate alcohol is absorbed depends on many variables: the amount and type of alcohol, the type of food, if any, consumed while drinking, and the individual’s tolerance for alcohol. For example, eating fried or fatty foods while drinking slows down the absorption rate, meaning the alcohol takes longer to get into your system. On the other hand, drinking on an empty stomach, or eating lightly, speeds up the absorption rate, so the alcohol gets into your system more quickly.

General Impairment: General Impairment is the lowest level of intoxication under the law and is charged in every DUI case under section 3802(a)(1) of the Vehicle Code. This section of the DUI law is not based on a specific blood level, but rather is based in the officer’s observations of sobriety. The officer’s opinion is based on his observations, driving behavior, performance on field sobriety tests and any statements made.

Implied Consent: Pennsylvania licensed drivers must agree when they obtain a driver’s license to give a test of their blood, breath or urine if an officer believes the individual is under the influence of alcohol or a controlled substance. If the individual refuses chemical testing, they are subject to a lengthy license suspension of at least one year simply for not taking the test. The police officer is supposed to inform the driver of “Implied Consent” also called O’Connell warnings which in essence, inform the driver that they must take the test and if they do not they are subject to license suspension and harsher penalties for refusing. Any suspension for refusing chemical testing is in addition to any penalties for the DUI itself.

Accelerated Rehabilitative Disposition (ARD): ARD is a beneficial program for first time DUI offenders which permits the individual to have the charges dropped and their criminal record expunged. ARD programs consist of mandatory alcohol classes, possible alcohol counseling, community service, payment of fines, and completing a period of arrest free behavior. Once all conditions are satisfied, the charges are dropped by the DA and the case is eligible for expungement.

CRN Evaluation: After the preliminary hearing, individuals charged with DUI are required to undergo a CRN evaluation which stands for court reporting network. It is an evaluation to determine if the individual would benefit from alcohol counseling and determines the length of the mandatory Alcohol Highway Safety School (AHSS) classes. The CRN is a mandatory evaluation and must be completed by the individual.

Mandatory Minumum Sentencing: Individuals convicted of DUI are subject to mandatory minimum sentencing that is set by the legislature. A mandatory sentence means that under the law, the judge has no discretion and must impose the minimum sentence. For first offense convictions where the blood alcohol level (BAC) is over .10, or if there was an accident, the minimum jail time is 48-72 hours. For second offenses, the mandatory minimum jail time is anywhere from 5 days to 90 days. For 3rd offenses, the jail time ranges from 10 days to one year in jail. Mandatory minimums mean that a judge cannot impose less than the mandatory jail time, but is free to impose more time if warranted.

Ten (10) Year Lookback Period: To determine whether a DUI case is considered a first, second or third offense, the District Attorney will look ten (10) years back from the date of the DUI to determine if an individual has prior DUI cases during the last 10 years.

Field Sobriety Testing (FSTs)
Field Sobriety Tests (FSTs) are tests given by the police officer to gather more evidence against the accused and to determine whether the individual is under the influence of alcohol or drugs. There are many different types of field sobriety tests and they are not mandatory under the law and can be refused.
9 Step Walk and Turn Field Sobriety test: This test consists of walking heel to toe for 9 steps, pivoting and then walking back 9 steps heel to toe on an imaginary line. Failures include stepping of the line, too much space between steps, using the arms for balance or walking the wrong number of steps.
1 Leg Raise Field Sobriety Test: This test consists of tilting the head back and raising the leg off the ground for a number of seconds. Failures include swaying, placing the foot down or counting to the wrong number.
Horizontal Gaze Nystagmus (HGN) Field Sobriety Test: This is commonly called the Pen test or Flashlight test where the officer moves a pen or flashlight across the eyes and asks you to follow it. This test has been ruled an ineffective way to gauge intoxication and is inadmissible in court against the motorist.
Preliminary Breath Test (PBT): After field testing many officers will ask the motorist to blow into a small breathalyzer known as a Preliminary Breath Test or PBT. This device is not accurate enough to be considered evidence in court but is used to give the officer a rough approximation of the blood alcohol content (BAC). The results of this test are inadmissible in court and may be refused by the motorist.
Refusal of Chemical Testing; If an officer feels a motorist is under the influence the officer may ask for a chemical test of the motorist’s blood, breath or urine. If the motorist refuses this test, he will still be charged with a DUI and will suffer additional penalties including a lengthy license suspension of at least 12 months or more.

If you are charged with a DUI in Pennsylvania you could be facing incarceration and lengthy license suspension if you are convicted. Call the experienced attorneys at Ellis B. Klein & Associates for a Free Consultation at (800) 536-0501. Our attorneys have years of courtroom experience and have personally handled thousands of cases. We would be happy to speak with you about your case and answer all of your questions so that you may make an informed decision about hiring an attorney to assist you with your case. Choosing an attorney may be one of the most important decisions you may ever make, so do so wisely. Call us today at (800) 536-0501 for a Free Consultation. 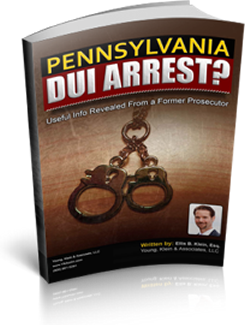