“Meeting” a School Bus also applies when a school bus is at an intersection and is “met” by traffic on a cross street. Even though the school bus is not directly in front of you and is located on a side street, the driver is still required to stop if the red signals are activated. This scenario commonly occurs at a stop sign where the school bus is picking up students on the side street. I have even had clients cited under the “Meeting a School Bus” language for proceeding through the stop sign and making a turn away from the bus. This scenario is best illustrated in the below diagram. 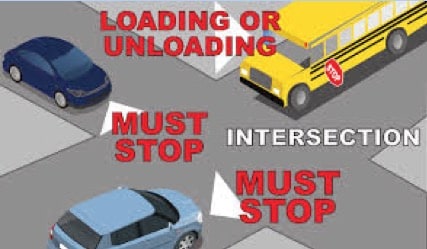 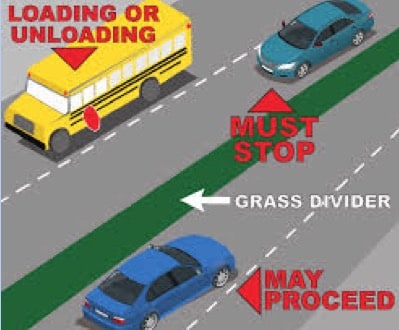 Violations for Meeting or Overtaking a School Bus is unusual in that it is the only traffic violation that permits a non-police officer to initiate charges against a motorist. In these situations, the motorist is not actually pulled over by the police officer, but rather, the charges are filed by the bus driver with the local police department and the driver is mailed a citation for Passing a School Bus. Within 48 hours of the offense, the school bus driver is required to submit a report to the police indicating the license plate, color and make of the vehicle, any identifying characteristics of the driver and the time and location of the incident. If a police officer believes that the report supplies enough information to warrant charges, then the police can file the citation with the District Court and the driver is then mailed the citation.

Additionally, many of the newer school buses are equipped with front and rear facing cameras, so a violation of this law could possibly be on video.

If you have been cited with Meeting or Overtaking a School Bus, you should immediately plead not guilty and go to court. Call the experienced attorneys at Ellis B. Klein & Associates for a free consultation. Our lawyers have handled thousands of traffic violations over the past 25+ years in practice. Call now for a Free Consultation and we would be happy to discuss your options with you and answer your questions.

I received a traffic violation for passing a school bus in which I was facing a 6-month suspension of my license along with 5 points against my driving record. After contacting Mr. Klein he assured me that he would do everything in his power to try and remove the suspension and hopefully reduce some of the points. My hearing was today and I’m very pleased to say that we went to trial and I was found not guilty by the judge. Not only do I get to keep my license I also will not be receiving any points against my record. Mr. Klein helped me out of a potential life-altering situation and I can’t thank him enough. He and his office were very easy to work with. He even returned my phone call on a weekend during his child’s sporting event. Now that’s dedication. He is by all accounts quite the professional and very good at what he does. I would highly recommend Mr. Klein to anyone.

I received in the mail a traffic citation for passing a school bus that was issued to me by mistake. I emailed Mr. Klein and he responded quickly with a phone call to me. He was considerate, easy to talk with, and listened to my questions. He was able to contact the Officer who issued the citation and provide the correct paperwork and proof necessary to dismiss the citation and have it withdrawn from court. This problem was resolved quickly which helped to alleviate the distress I was feeling by being falsely charged with a serious traffic violation. I am grateful to Mr. Klein for his prompt and professional help.

I used Ellis as my lawyer for a passing a school bus violation that I had received. Not knowing, I initially pled guilty and the violation came with a loss of license for two months. Ellis was very upfront with me about my chances of appealing this charge to the higher court. He made my case very personal with the DA and because of his close relationships was able to get the violation reduced so I did not lose my license. I cannot say enough about how grateful I am that I retained Ellis B. Klein. He was compassionate and kept me informed as he was working with the police and the DA. His former experience as a prosecutor and the relationships he has with many in the court system helped me tremendously. I would recommend him to anyone needing assistance with a traffic related offense.

Practice Areas
Will Your Insurance Go Up if You are Convicted of a Moving Violation in Pennsylvania?
Client Reviews
★★★★★
Ellis Klein is a terrific attorney who represented my son in a DUI case. Ellis was understanding and sympathetic yet very forthright regarding the seriousness of the issue. He was extremely knowledgeable of the process and kept us informed at every step. He had a very professional presence, was confident (but not arrogant) and kept us calm throughout a very traumatic situation. He was a critical factor in my son receiving the best possible outcome from this DUI event. John Doe
★★★★★
Recently Mr. Klein helped me out with a criminal charge in which the outcome was the best possible situation for me. Ellis worked with me as far as a payment plan, knew the judge and officer and I couldn't ask for anything more out of a lawyer. I'm very happy with his performance and would recommend him to anyone. Jane Doe
★★★★★
Ellis literally gave me a new lease on life. I was facing a DUI, which would have affected my livelihood, my freedom and would have left me with a criminal record. Mr. Klein was able to have all the evidence suppressed by challenging the officer's cause for pulling me over. He was very thorough, leaving no stone unturned. His demeanor in court was confident and knowledgeable. He saved my reputation and my family from facing serious economic hardship. Thank You Anonymous
★★★★★
Ellis Klein served as my lawyer in a very difficult case that I was facing and with his help, the outcome of my case turned out wonderful. Mr. Klein helped me very much with his knowledge of my case. Thanks Ellis! Anonymous
★★★★★
Like many young adults, I made a bad decision that resulted in very serious consequences. I was afraid and nervous. Ellis was very straight-forward when he explained things to me, telling what the best outcome could be as well as the worst. Through his knowledge, professionalism, and legal reputation, my case was resolved with the best possible outcome. I advise my friends not to make the same mistake that I did, but if they do I will highly recommend Ellis. I feel like I have been given a second chance. Anonymous
View More
Submit a Law Firm Client Review